Everything We Learned on National Honey Bee Day 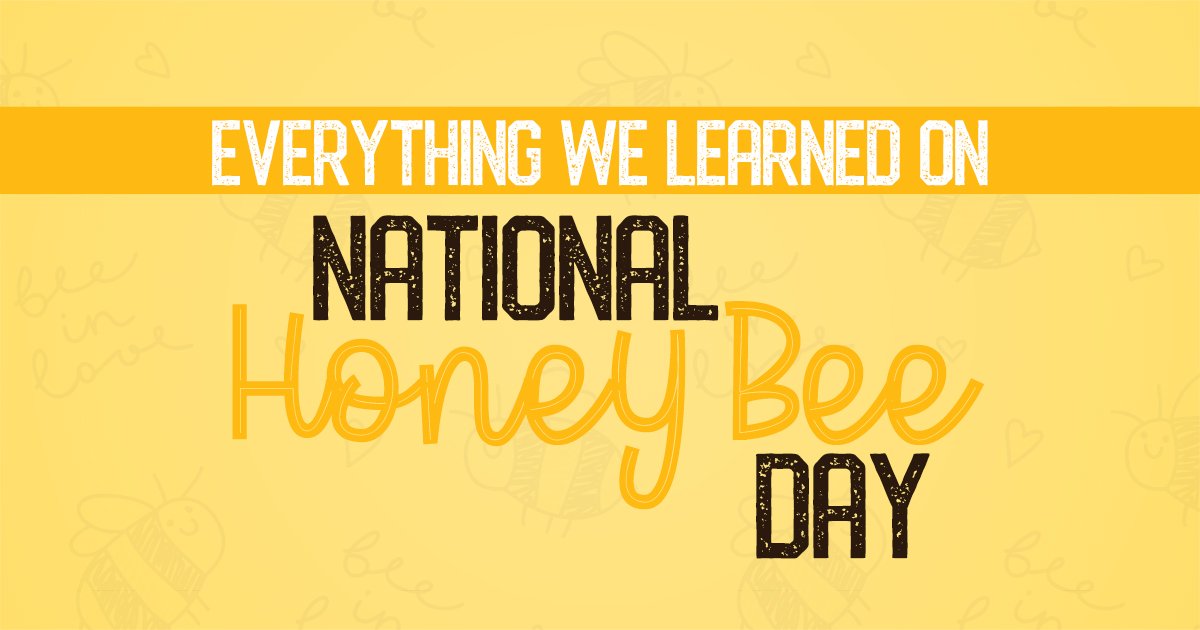 You know we couldn’t let this holiday pass without celebrating! For National Honey Bee Day (Saturday, August 15th) RAD’s safety bee, HerBee, asked our community of bee-lievers to share fun facts about the honey bee! We learned so much about about how bees affect everything from medicine to agriculture! Below are some of the incredible facts we received!

The queen bee’s sole role in the colony is to reproduce. She lays eggs while her “court” feeds and cleans her. She gets too heavy to fly. When the colony prepares to swarm, they stop feeding the queen so she gets light enough to fly. The worker bees will feed royal jelly to some of the larvae which creates new queens to leave with the original hive before the existing queen and roughly 50% of the workers leave (swarm) to a new location to build a new hive. This is after “scouts” (basically worker bee realtors) find a new location.
The queen may lay 600-800 or even 1,500 eggs each day during her 3 or 4 year lifetime. This daily egg production may equal her own weight. She is constantly fed and groomed by attendant worker bees!
Bees are changing medicine. To reinforce their hives, bees use a resin from poplar and evergreen trees called propolis. It’s basically beehive glue. Although bees use it as caulk, humans use it to fight off bacteria, viruses, and fungi. Research shows that propolis taken from a beehive may relieve cold sores, canker sores, herpes, sore throat, cavities, and even eczema.
The term “honeymoon” originated with the Norwegian (indigenous) practice of consuming large quantities of Mead during the first month of a marriage. Mead is fermented honey, the most ancient fermented beverage, made entirely by busy buzzy bees!
When a bee finds something that will be of significance to the hive, it returns to the hive and dances. This dance tells the others where to find the food source.
The color and flavor of kinds of honey differ depending on the nectar source (the blossoms) visited by the honey bees. There are more than 300 unique types of honey available in the United States, each originating from a different floral source.

Honey bees are fab flyers. They fly at a speed of around 25km per hour.

The queen may mate with up to 17 drones over a 1-2 day period of mating.

Honey bees store their honey in airtight containers and it never spoils. Sealed honey vats were found in King Tut’s tomb and still contained edible honey, despite over 2,000 years beneath the sand!

Honey bees are the most important pollinators of food crops in the world! That’s why we need to keep them around!

Worker honey bees have different jobs depending on their age. Bees 3-5 days old have to feed older larvae while bees that are 6-11 days have to feed the youngest larvae. Bees that are 18-21 days old protect the hive entrance and are on guard duty.

Female bees in the hive (except the queen) are called worker bees.

The average honey bee will actually make only one twelfth of a teaspoon of honey in its lifetime.

A honey bee can fly for up to six miles, and as fast as 15 miles per hour, hence it would have to fly around 90,000 miles -three times around the globe – to make one pound of honey.

Bees maintain a temperature of 92-93 degrees Fahrenheit in their central brood nest regardless of whether the outside temperature is 110 or -40 degrees.

Worker bees (females) do all the work, while drones (males) only have to mate with the queen.

It takes one ounce of honey to fuel a bee’s flight around the world.

Honey bees have five eyes, 3 small ones on top of the head and two big ones in front. They also have hair on their eyes!

Honey bees are the only insect that makes food edible for humans.

Each bee has 170 odorant receptors, which means they have one serious sense of smell! They use this to communicate within the hive and to recognize different types of flowers when looking for food.

A honey bee visits 50 to 100 flowers during a collection trip.

Bees use the sun as a compass, and on cloudy days, use polarized light to find their way.

Honey bees beat their wings about 200 times per second.